Senkaku Islands are located in the East China Sea, 130-150 kilometres north of Ishigaki Island, Japan. Senkaku has five islands and three rocks including Uotsuri Shima, Kuba Shima, Taisho Toh and Minami Kojima. There is no people living in any island for now, but from 1895 to 1940, there were more than 200 Japanese residents in Senkaku Islands. Around the Islands, you will find many fish and albatrosses; no wonder it is famous for breeding ground of Black-Footed Albatross, Brown Booby and Sooty Tern. The sea around Senkaku Islands is know as a great fishing ground. Also, it is said that there is much oil and natural gas field around Senkaku Islands.

Japanese government has looked into them to confirm that no country govern them for ten years, from 1885 to 1895. In 1895, Japanese Cabinet Council determined that Senkaku Islands was never ruled by any country and that Japanese government would start incorporate into Japanese territory. At that time, there was no objection against it from any other country including China.

As I said before, there used to be many Japanese. At the peak, 280 Japanese were living in Senkaku Islands during 1895 to 1940. The residents ran some factories which process feathers of albatrosses and dried bonito. There are some vestiges of the factories even now. Senkaku residents must leave there because of the war, and they could never return to the islands.

In 1945, the Second World War ended and Japan abandoned dominium rights of some islands including Taiwan. After that, Taiwan was ruled by Kuomintang (KMT), however, KMT government did not considered Senkaku Islands to be their territory. Same year, the United States as Grand Headquarters (GHQ) took control of Senkaku Islands and set Islands’ midair at air defense identification zone.

Eight years later, in 1953, Chinese governmental newspaper called People’s Daily introduced Senkaku Islands as one of Okinawa’s Islands. And yet Taiwanese fishermen encroached upon Japanese territorial waters, for example, a Japanese fishing boat was assaulted by Taiwanese pirates and two Japanese fishermen was killed in 1955. The rest of Japanese fishermen, seven men, dived into the sea but four of them were missing.

But in 1969, UNESCAP (United Nations Economic and Social Commission for Asia and the Pacific) reported Senkaku Islands’ possibility of so huge deposits of oil that would equal Iraqi oil field. Surprise, surprise. Only two years after, in 1971, Taiwanese government began to argue dominium rights of Senkaku Islands. One more surprise. Only, just only two months later, Chinese government announced the same. To my strangeness, Taiwanese textbook explained Senkaku Islands as a Japanese territory one year before its announcement. Hmm…

Since then, China and Taiwan continue to protest against Japan to argue their dominium rights of Senkaku Islands. In 1978, approximately 100 Chinese fishing boat encroached Japanese territorial waters and illegally caught fish. In same year, Deng Xiaoping, Chinese vice Prime Minister (then), said “I am willing to shelve the problem like this for a while, because the next generation would have better wisdom than us.” I think he meant that the next generation would have stronger power and defeat Japan. I believe he must think that “We Chinese do not have power enough to threaten and persuade Japan for now, but the time will come when we can do it. We should wait for the time.”

Recently, a Chinese fishing boat collided with patrol boat of Japan Coast Guard and attacked it. The skipper was arrested for “an interference with a government official in the execution of officer belonging to Japan Coast Guard duties” in 2010. After that, the skipper was released, however, China retaliated with leaving no stone unturned. Chinese police arrested four Japanese for doubtful reason, fined many Japanese companies and stopped export of rare earth for a while. In the meantime, the skipper was watched in his house by Chinese police although he was treated as a hero when he was arrested by Chinese government. China is like that.

To conclude, Senkaku Islands evidently belongs to Japan. There are many evidence which shows that Senkaku Islands belong to Japan and China admitted that it is Japanese territory, but nevertheless Chinese people do not know this fact because of governmental censorship. See this picture on the left; “日本人 禁止入内” reads “No Japanese Allowed.” This is a sign showed in a cafe in China. You can use Wi-Fi but cannot drink a coffee with Japanese friends here. This is even racism, isn’t it? 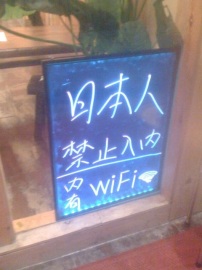 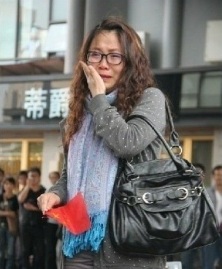 A picture on the right is a Chinese woman who cries because her car made in Japan was destroyed by “anti-Japanese” mobs. What makes it funny is that she was one of the mobs. Shouting “Boycott Japanese products!” after coming there by Japanese car — This is called the Chinese paradox.

Chinese government is too blatant. It is so vulgar and greedy that it does not select means. We should be careful and try to avoid being deceived by it. It seems that China is very strong, however, it also seems that China does not have their cause, that is to say, it only acts due to their appetite. This fact is what we could resist against Chinese imperialism. We should take advantage of their defects.

2 responses to “Do Chinese Have “Cause?””

What are you looking for?

Reckless journalist with passion who got deported 3 times.
I don't hesitate to use violence of words against tyranny.
Anti-government in almost every country.
Be bigger than the Earth, smaller than a bug.